In summary, if you use the ACR Digital Mammography Quality Control Manual to test a digital mammography with an add-on stereotactic device, you must also perform the following tests as outlined in the 1998 ACR Stereotactic Breast Biopsy QC Manual for annual QC of the stereotactic breast biopsy component of the system:

If your stereotactic breast biopsy unit’s field-of-view is relatively large, you may use the following test procedure for phantom exposure with your digital image receptor: 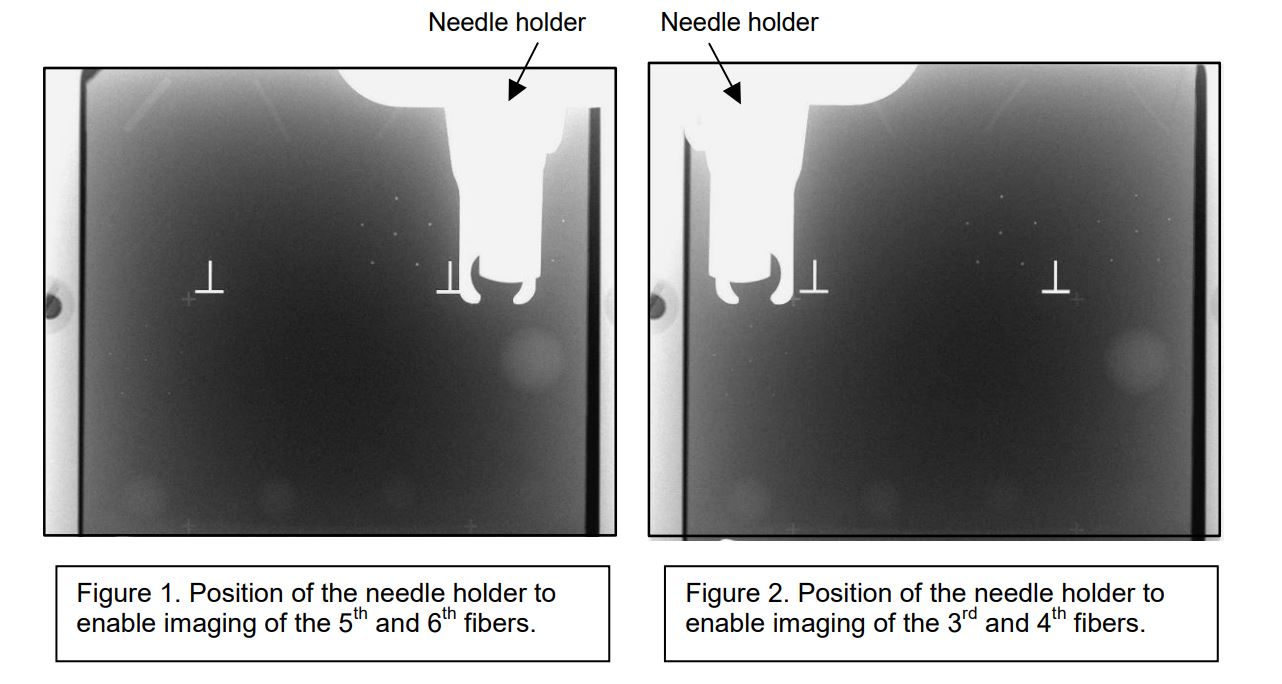 Phantom selection: If a facility is using the 2016 ACR Digital Mammography Quality Control Manual (and new digital phantom) for their digital mammography unit and is also doing 2D stereo with an upright add on stereo attachment, the facility should continue using either the small ACR Mammography Phantom or the Mini Digital Stereotactic Phantom for routine quality control and submitting phantom images to the ACR for accreditation.

AEC or Manual Exposure Performance Assessment: The ACR 1999 Stereotactic Breast Biopsy Quality Control Manual requires that the medical physicist performs a test for Automatic Exposure Control (AEC) or Manual Exposure Performance Assessment. This is difficult to accomplish with an add-on device since the needle apparatus remains in the way. The equivalent test of automatic exposure control that is annually performed for the digital mammography unit may be used to satisfy the requirements for the stereotactic breast biopsy unit. It should be representative of stereotactic breast biopsy performance.

Most facilities that have digital stereotactic breast biopsy equipment have gone totally filmless, removing all chemical processing. When wet processing of film is unavailable, there are several alternatives for the Collimation Assessment test in the Medical Physicist’s section of the ACR 1999 Stereotactic Breast Biopsy QC Manual:

The ACR understands that many stereotactic breast biopsy units are in a total filmless environment. In addition, overall “system resolution” is the most critical test. The Medical Physicist’s Stereotactic Unit QC Test Summary (see excerpt below) indicates that you only need to perform the evaluation related to the modality used, film or digital.

In addition to assessing the “consistency of system-limiting spatial resolution over time and in comparison to acceptance testing results”, the ACR also recommends that the results be compared against the manufacturer’s stated specifications.

The Stereotactic Breast Biopsy Quality Control Manual’s Automatic Exposure Control (AEC) test calls for performance testing at phantom thicknesses of 2, 4, 6 and 8 cm. The performance criteria for digital systems specifies that “the signal value should remain within ±20% of the signal obtained for the 4 cm phantom…if it does not meet this criterion, the medical physicist should develop a technique chart which meets this criterion.”

Some units do not provide enough signal to pass this test for an 8 cm phantom. Some radiologists use manual modes with lower signals on very thick breasts, and don't find the lower signal a problem. Although the 1999 manual recognizes that it may be difficult to maintain signal at 8 cm under AEC (and thus allows for a manual technique at 8 cm), more recent experience has shown that these techniques can be quite long, and in some cases, not permissible on the equipment. In addition, medical physicists are finding that radiologists are used to “reading through” noisier images of very thick breasts. Consequently, in order to pass this test, only 2, 4 and 6 cm must meet the ±20% criteria. However, if the 8 cm test does not meet the criterion, the medical physicist should develop a technique chart for 2, 4, 6 and 8 cm showing 2-6 cm within range and 8 cm being as close as possible using a manual technique (and clinically acceptable).

The performance criteria of the Average Glandular Dose test in the Medical Physicist’s section of the ACR 1999 Stereotactic Breast Biopsy Quality Control Manual specifies that the “average glandular dose to an average (4.2 cm compressed) breast should not exceed 3 mGy (0.3 rads) per view for screen-film or digital image receptors.” For ACR accreditation, the intent is that the dose be assessed at the mode used clinically. The manual directs the medical physicist to use the technique that is clinically used to assess dose:

The Radiologic Technologist’s Test #3 (Hardcopy Output Quality Test) in the ACR 1999 Stereotactic Breast Biopsy Quality Control Manual requires that a printed SMPTE pattern be reviewed monthly by measuring the optical density at “four consistent locations on the film.” For facilities using breast biopsy attachments on Hologic Dimensions mammography units, the Hologic Dimensions QC manual has a similar, weekly DICOM Printer Quality Control test with the SMPTE pattern, but only three locations are evaluated. If the equipment manufacturer provides a different QC process and if it is reviewed and approved by the facility’s medical physicist, the facility may follow the manufacturer’s QC process for their hardcopy output device instead of the one provided in the Stereotactic Breast Biopsy QC Manual.

The Stereotactic Breast Biopsy Quality Control Manual’s Digital Receptor Uniformity test calls for the SNR value at the corners of the image field of a uniform absorber to be within ±15% of the center. To pass this test, some Lorad service engineers have suggested a protocol for obtaining the SNRs using 32x32 ROI boxes centered well away from the corners of the 512x512 image (these coordinates are: 100,100; 100,400; 400,100; and 400,400). Many Lorad-based Hologic systems exhibit a signal intensity gradient at one or more edges of the field, which leads to a SNR gradient. Since the non-uniformity occurs only at the edge of the field, it should not compromise patient imaging. Also, it is gradient, not isolated inhomogeneities that might be mistaken for abnormalities. Throughout the Stereotactic Breast Biopsy Quality Control Manual, we have consistently deferred to manufacturer's specifications in the absence of hard data on how performance variations might affect image quality in many areas. Therefore, one can accept the manufacturer's test conditions and action limits. That being said, it may be possible to improve the uniformity on your Lorad system. Some medical physicists have found, and Lorad engineers have confirmed, that the gradient problem may arise because of the way flatfielding (a service engineer's task) is done. The digital image receptor is "flatfielded" without the steel compression paddle (which is also an X-ray beam-limiting aperture) in place to allow calibration of the image receptor to its edges. However, in phantom testing and in clinical use, the compression paddle/beam aperture is always in place, and the resultant reduced-size X-ray beam may have a different symmetry with respect to the edges of the receptor than when it was flatfielded. This effect can be minimized if the collimation at the X-ray tube is adjusted so the Xray beam is larger than the compression paddle aperture by precisely the same amount on each of the 4 edges. Lorad recommends between 5-10 mm for this margin.

The AEC (AOP) system in the General Electric Pristina Serena used for stereotactic biopsy is designed to optimize the CNR for a given dose rather than standardizing the signal level uniformity as a function of attenuator thickness. Consequently, the ±20% criteria in the 1999 QC Manual is not applicable to this system. Facilities using the GE Pristina Serena may use the test procedure and performance criteria provided by the manufacturer. Visit the GE Healthcare Customer Documentation Portal or consult with your vendor representative for the AEC (AOP) test procedure and performance criteria in the Pristina Serena QC Manual.